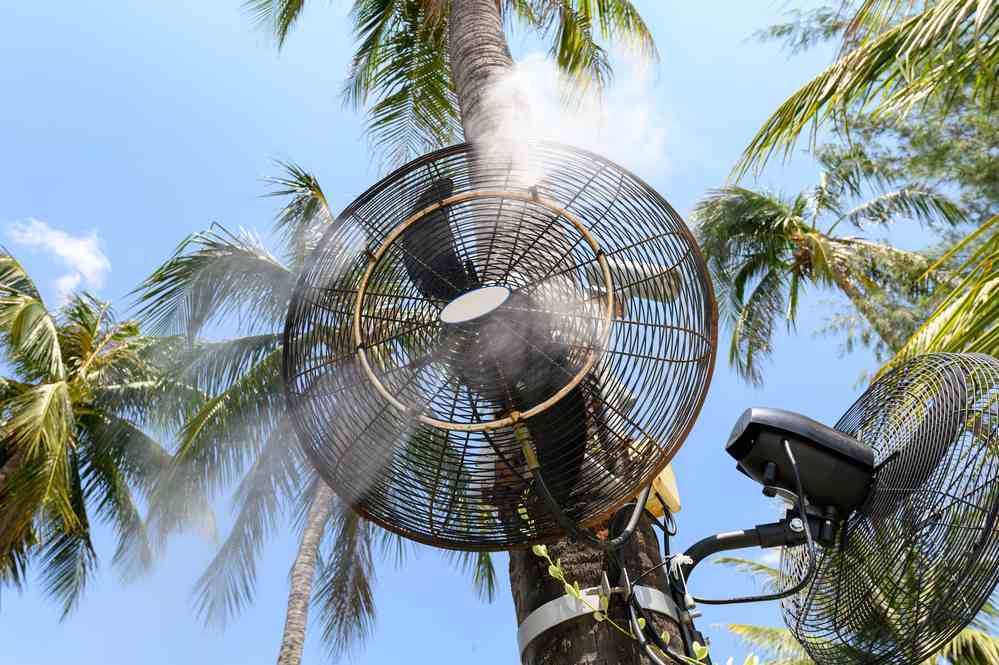 Summertime is perhaps the best time of year to relax under the sun, get that tan you’ve been wanting to brag about and fire up the grill. However, the summer heat can be a bit unfriendly and unbearable at times, causing you to spend more time indoors than outdoors. Summertime can also cause discomfort in indoor spaces as well, even with a regular fan because its merely blowing hot air around.

What are Mister Cooling Fans?

Misting fans and misting cooling systems are generally seen outside in theme parks or when dining al fresco at high-end restaurants, but are now available in compact footprints for home and office use.

They are a great way to stay cool and comfortable on both summer days and nights, and replicate the cooling effect of an air conditioner in outdoor areas. Further, they can make the heat more manageable indoors for young and old and everyone in between.

Misting cooling fans are powered by either batteries or an electrical outlet, and use an onsite water reservoir or your regular garden hose connected to a water supply to create mist. The integrated fan then emits these tiny droplets into the air to reduce the temperature, and create a more pleasant environment.

When shopping for the best mister, you will come across myriad different options, but here’s a few you will see more often than others.

– just like the name suggests, floor standing misting fans, pedestal misting fans aka standalone misting fans rest atop an extended pole, which is mated with a solid base.

This range of fans is generally easy to move around, and can be setup outdoors as well by connecting them to a hose connection for water supply, and plugged into an electrical outlet for power. Additionally, some of the best floor standing misting fans feature an oscillation function, and can be adjusted for height.

– this type of fan mister tends to be smaller than standalone misting fans, hence take up less floor real estate. They are easier to move around than their bigger, taller cousins, and can be either connected with a garden hose or an onsite tank for water supply.

Compact misting fans are either powered by batteries or electrical outlet, and since they’re easier to move around and portable, they make a great choice to take on the road, setup in RV’s or outdoors while camping.

– misting fans that showcase a wall mounted design offer twofold benefits…first they attach to your wall and second prevent injury. When they’re out of your way, you save on valuable floor space, and also prevent hazards such as tripping and nosy kids from touching them.

On the flipside, wall mounted misting fans do store less water in their attached reservoir, so you may find yourself refilling the tank often if you use the fan for longer periods.

And given that these fans are to be attached to the wall, you will have to drill a couple or more holes to install the mount, which may cause damage to your walls if you’re not careful.

– but what if you already have a regular fan, and would just like to stay relaxed and cool in the midst of mist rather than buy another new fan! Well, you can with misting kits!

These kits come with hoses and nozzles that attach to your regular fan to provide the misting function. So, you get the best of both worlds – cooling power of water and strong airflow of your regular fan. Or you could build your  own DIY misting fan.

Are Misting Systems in Backyards and Patios a Better Option?

First thing to determine is the weather of the environment you live in. If you live in a humid or tropical environment such as Florida or Mexico, then buying a misting fan is your best bet to move the air around and provide better cooling.

Next is to figure out the type of space you have, where a misting fan is typically a great choice for open aired patios and backyards. Some open areas however especially larger areas may require both a misting fan and misting system.

And if your space attracts a lot of bugs, mosquitoes, you should consider installing a mosquito misting system. These are engineered to release pesticides at timely intervals to kill mosquitoes and insects outdoors.

In terms of cost, outdoor misting systems in most cases require professional installation, and add to that cost of periodical professional maintenance. Furthermore, they are permanent installations, so can’t be moved around to cool other areas within the property.

Given this lack of portability and higher costs, buying a fan mister or even a couple of them can prove more beneficial than installing a misting system in just one area of your home. Some of the best water misting fans are even equipped with wheels, making it easy to transport them between indoor and outdoor areas.

Here are a few common terms you will come across when buying fans with a mister:

RPM’s mean two things – noise level and the speed at which the fan is spinning, but keep in mind that increased speed doesn’t necessarily mean better output. This is because the speed also depends on the aerodynamics of the blades, where straight and flat blades do not generate much airflow regardless of how fast they spin.

Generally speaking, smaller misting fans such as standalone and wall mounted versions will use pressure from the hose and the water pressure it provides, whereas commercial misting systems create far greater PSI with an integrated pump.

Key Features to Consider when Buying a Water Spraying Fan

A misting fan may seem like a no-brainer to buy, and they are for the most part! But there’s still a few important features to consider even before you head out on the shopping trail.

– you want to buy a misting fan that will cool your entire area, so measure your area first and look for a fan that fits the bill. Misting fans can be ordered in a wide range of speeds, blade sizes, and oscillation functions, so the bigger the size of the blades, the higher the speed,

Indoor or outdoor use

– some misting fans are designed for misting indoors or outdoors, but not both. Then there are a select few models that can mist in indoor as well as mist outside spaces.

If you’re going to be buying an outdoor misting fan, you also have to pay attention to the materials it is made from, because the last thing you want is for it to rust in inclement weather.

And given that misting fans do come with a few switches and other components such as a motor, you want to make sure that these are well protected when placed outside. Manufacturers generally list the type of space (whether indoors or outdoors) their models are designed for right on the box or in the included user guide.

– once you figure out the amount of space and type of environment you’d like to mist, you will be able to easily choose the right type of misting fan for your needs, whether pedestal, wall mounted, portable, etc.

– Some misting fans need to be connected with a hose for continuous water supply, whereas others source water to create mist from an onboard reservoir or connected bucket. If you choose a model with a connected tank or reservoir, then be sure to check out the amount of water it can hold, so that you don’t have to refill it often.

Sprayer fans make is easier to work comfortably and enjoy the great outdoors in hot temperatures, but do require periodic maintenance to deliver their best performance. If your misting fan is emitting uneven or insufficient mist, you should check if the water supply is adequate, because less water, less mist.

Mineral buildup in the nozzle of the misting fan may also cause hindrances in the flow of mist, so turn off the fan, remove the nozzle, soak it in vinegar, wash it, let it dry and then reinstall it. Dust is another reason you will want to check on the nozzle, because this may cause them to clog and generate filthy mist.

Leaks are yet another common problem with cheap misting fans, which is why it is highly recommended that you pay a few bucks more for a high-quality cooling device. Leaks when gone unnoticed can increase water consumption, and in worse cases will need water tank replacement.

And given that the features of misting fans can vary across models and manufacturers, you should follow the usage and setup instructions in the included instruction manual. While perusing the user guide, take note of the safety instructions too to prevent any hazards.

A few basics of misting fan safety include keeping the fan away from electric outlets since they spray mist. Next, use only manufacturer recommended spray nozzles for the best cooling effects, and for greater longevity of the motor.

Regular maintenance as mentioned earlier is very important to the overall functionality and safety of your misting fan, because even moisture buildups can lead to short circuits.

Even though misters can be used in the environment specified by the manufacturer, you should keep that area well ventilated (open the windows, etc.) to prevent water buildup on objects near it.

With regards to placement, refrain from setting a tall misting fan in areas that receive heavy foot traffic, but place it in a corner instead.

Misting systems are a great way to keep yourself, kids and pets cool on humid summer days and nights. They are easy to use just like a pedestal fan, and can be connected with your outdoor hose or come with an integrated tank for water supply.

Adding to this, mist enabled fans can be ordered in a plethora of design variants and wide range of features, and after reading our misting fan buying guide, you should know what is the best misting fan for your needs. 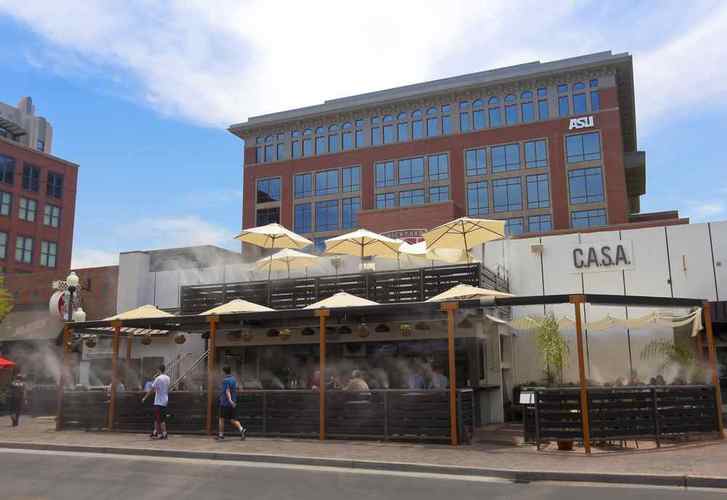