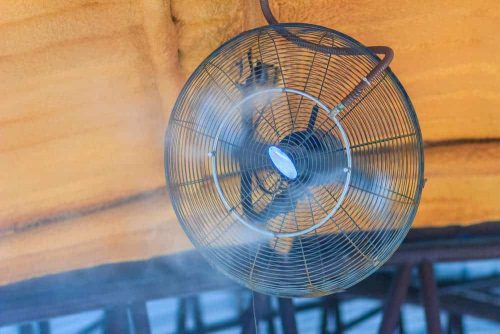 Summer can be a whole lot of fun, but on the downside can bring about a wave of excruciating heat. These unbearable temperatures aren’t just uncomfortable to get caught up in, but can be downright dangerous. In fact, records indicate that several people have lost their lives due to summer illnesses, most commonly heat strokes.

While there are myriad ways to stay cool in the summer and avoid heat sickness, one of the most effective and cost efficient option is with a misting fan. You probably already use a conventional fan in the summer, both indoors and outdoors, then what is a misting fan?

Misting fans just as the name would suggest are similar to regular fans, except that they emit mist too at regular intervals. Unlike air conditioners, misting fans can be used either indoors/ outdoors or in both environments, and are a great way to cool off while saving a significant amount of cash on electricity bills.

What do Misting Fans do?

Normal fans are also an economical way to keep yourself cool in the summer, but do tend to blow out hot air, which results in higher rather than low temperatures. A misting fan looks similar to a normal fan, but is attached with a fan mist ring or similar mechanism.

This component creates tiny mist droplets of water, which quickly evaporate and blow out of the fan resulting in reduced temperatures almost instantly. Owing to their increasing popularity, misting fans are today used for industrial and commercial cooling applications such as dust control, restaurant cooling, and residential cooling such as garage and portable misting.

How Misting Fans Work and how do they Cool you?

A misting fan basically uses thermal dynamics to provide a cooling effect upon evaporation. It uses a standard water supply, which could be provided through an outdoor garden hose or an onsite water tank.

Both indoor and outdoor misting fans are equipped with nozzle openings, which squirt out water in the form of mist. The fan blades then circulate the mist in your space, and mix it with the warm air. Temperature in the area is also greatly reduced when the warm air molecules and the mist evaporate, creating a similar effect as an air conditioner.

The coverage area of the mist emitted and cool air depends upon the size of fan blades, where the bigger the blades, the farther the reach of the mist. As mentioned earlier, the mist of a misting fan is created by water, but surprisingly you don’t get wet given that it only contains a small amount of moisture. The moisture evaporates almost immediately when it touches any surface.

Misting fans are highly versatile appliances, in that most of the best models offer adjustments for height, oscillation and more, so you can match its cooling function to your desired needs. While most of this type of cooling fans are used in outdoor environments, where air conditioners aren’t a good fit, it is interesting to note the energy efficiency between the two types of cooling appliances.

Is Your Location Appropriate for a Misting Fan?

Misting fan cooling is highly effective in environments that experience less humidity such as the western slice of the USA. Take for example, the city of Phoenix where the air feels really dry on a summer day, so water will evaporate almost instantly when it spills. So, the hotter and drier the air in the environment, the more efficient the cooling from a misting fan.

However, if you live in the east coast, where summer days are extremely humid, you may be better off with an air conditioner rather than a misting fan because everything feels damp already. A good way of determining whether you should turn on your misting fan or not on a particular day is by watching the morning weather report, and checking the level of relative humidity.

But apart from keeping you cool, misting fans also do a fantastic job at removing contaminants and contaminants in the air we breathe. In fact, countries such as China have installed mist cannons in their most polluted cities as a solution to eliminate smog and particulates. This means that you can enjoy the benefits of a misting fan regardless of which part of the country you live in.

How to Use a Misting Fan?

Using a misting fan is actually a no-brainer…similar to using a conventional outdoor or indoor fan. The only difference is that there are two mechanism that operate – mist and fan instead of one. Since misting fans models vary across manufacturers, it is highly recommended that you read the included user guide included in the box for tips on operation.

But in order to bring home the best misting fan, you need to determine the right type for your needs, whether an indoor model that comes with a water tank or outdoor model that connects with your garden water supply. Next, you should decide where you will be placing the misting fan, and quick tip is that they work well in properly ventilated areas.

How much Water does a Misting Fan Use?

What Types of Misting Fans are Available?

Misting fans can be had in a choice of several different variants, most notably wall mounted, portable and floor standing models. When shopping for the best misting fan, you will also come across handheld models, but it goes without saying that these will not provide the same high surge of mist as other types.

If you’re going to be taking the misting fan with you on the go, a tabletop model is an ideal choice, but if it’s going to provide cool air in your backyard, then buying one that connects with your outdoor water supply makes perfect sense.

Where to Buy a Misting Fan?

Misting fans are available in both brick and mortar stores Walmart, Costco, Target, Home Depot, Lowes, Ace Hardware and online at Amazon, etc. Whether you buy one online or at a physical store, it is wise to do your homework with regards to the type of fan you need, your water supply and don’t forget to read misting fan reviews to get first hand sight on the user experience.

Buying a misting fan is highly beneficial for you, your family and pets regardless of the type of environment you live in. The aforementioned information should serve as a definitive guide on buying a misting fan, and ease your buying decision when on the shopping trail.