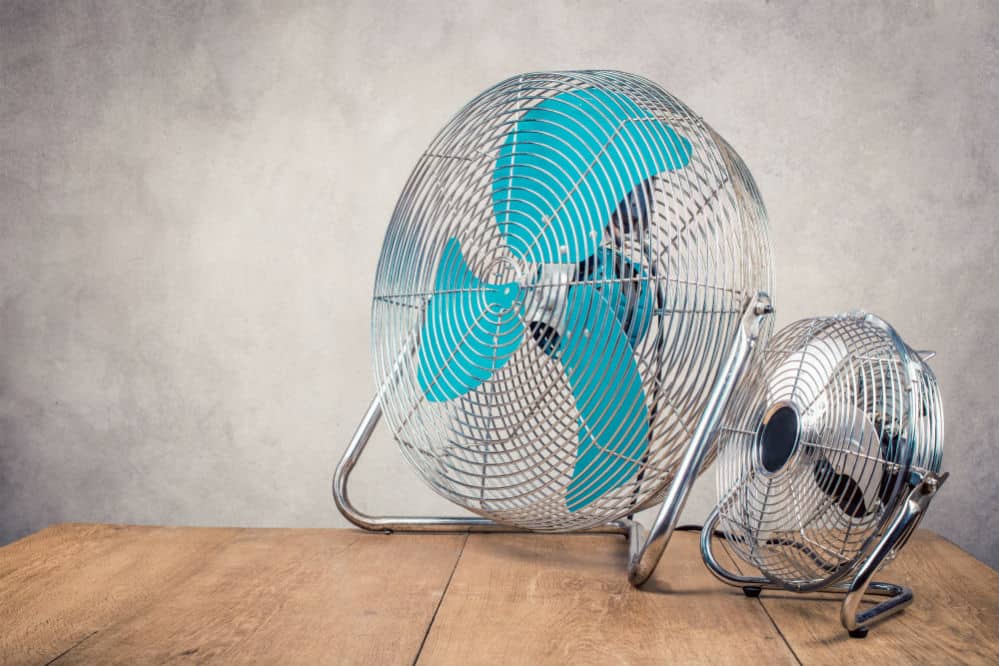 We usually see this CFM when buying a new fan, but what does CFM stand for in fans? Does it affect the function of the fan? Is it something we have to concern ourselves with?

With this quick read about CFM, you might be surprised by the fact that it should be really part of your decision process when getting a fan. You might even be surprised that not a lot of companies display the CFM of their fans. Instead, you have to compute it by yourself.

What Does CFM Stand for in Fans?

CFM stands for cubic feet per minute, and it can also be called as airflow. To put it simply, it is how much air a fan can move, and it is determined by letting the fan run at its highest speed and compute it against the rate at which it moves and the volume of the air. The rule of thumb is, the greater the CFM number, the more air your fan will be able to move.

This number is based on the following:

Based on the power of the motor, you will know how much force is needed to pull in air and to expel air. At the same time, this also determines the capacity of the motor to stabilize the blade while it spins.

2. Pitch of the Blade

This refers to the turning angle of how the blades are hit which will then determine the absorption of power or control of production in terms of air. Simply put, it is how the wind hits that angle of the blade. Is it forceful? Is it weak?

3. Shape and Length of the Blade

The shape of the blade has more impact on this as there are shapes that pave the way for the blades to spin faster and with less effort or force coming from the motor. As for the length, it is also important to note it because the longer it is, the more surface area it covers to hit the surrounding air.

Is It Important to Know the CFM?

Yes, it is. Sadly, this fact is overlooked because of all the other features of a fan. But in general, it is good to note the CFM for the following reasons:

This refers to how effortlessly the air gets in and out the fan. It is important because if the air is not getting out effortlessly, the fan will force itself to push out air; thus, requiring more power, which means there is more consumption of electricity.

This is usually the problem with old fans because most of the force needed for the blade to spin is derived from the motor. Therefore, the use of electricity is more significant. Unlike the fans of today, the blades themselves also pick up some of the slack for it to spin even with just a little bit of aid from the motor.

You can get the airflow efficiency by dividing the watts and the amount of energy that was used to run the fan at its top speed. By default, getting a result of 75 means that your fan is airflow efficient.

In determining the CFM, you can estimate how many fans you need to keep a room cool. Again, just like what we discussed before, the CFM rate determines the airflow. If you know the CFM, you will know if that fan is enough for a big or small room.

Other than that, it also works the other way. When you only have a small room, the CFM of your fan should just be enough to function in that room so that the air will be circulated appropriately.

3. Getting the Right Size

It is also based on the CFM whether you should buy a bigger or a smaller fan. The rule of the thumb is that the CFM rating should be two to three times the size of the home square footage. If the result is not bigger, then you should consider getting a bigger fan.

How to Compute for the CFM?

Now that you know what does CFM stand for in fans and how important it is, computing for it is a basic knowledge you should learn. As mentioned, some brands advertise the CFM of their fans, but there are still those that you have to compute first to determine the CFM.

Here is the calculation:

The formula is as follows:

The CFM or cubic feet per minute is an important factor to consider when buying a fan. It does not only pertain to the airflow power, but it can also determine your consumption of electricity. We highly recommend that you look for the CFM or compute for it before buying a fan.

In doing so, we are sure that complaints regarding how strong or weak your fan is will be minimized because, with the use of the CFM, you now have the exact fan that fits the size of the room that you are going to place it in. More than this, you already know how much it will add to your electricity bill.

Lastly, and probably the most vital thing about knowing the CFM of a fan is the fact that you are given a choice if you prefer how apt is the airflow in its intended room or how strong you want your fan to be.