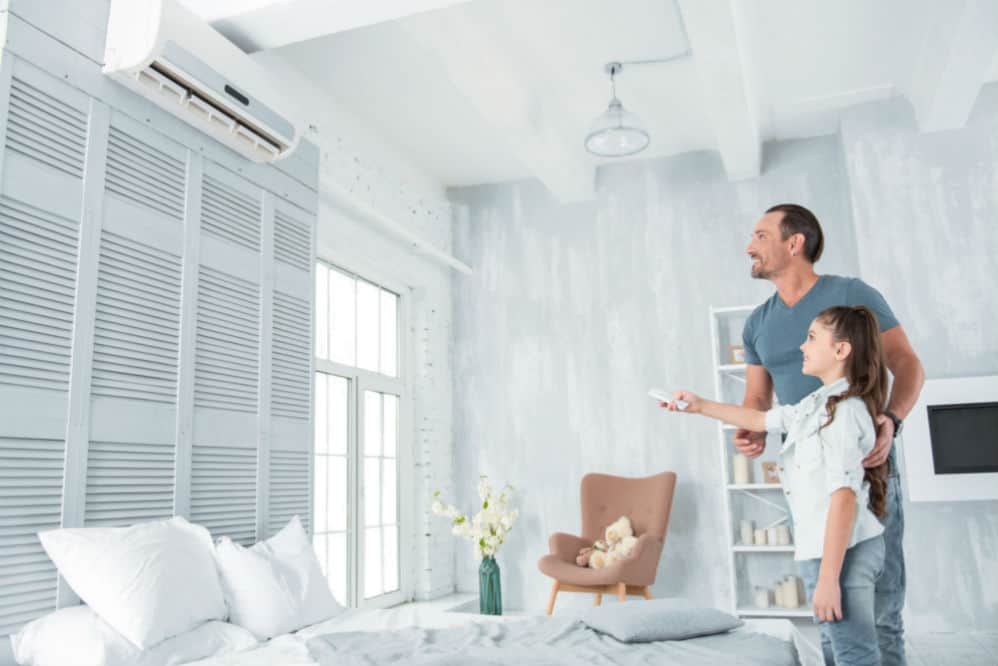 While it may not seem like those of us living by the beach or in warmer climates have much to complain about, there is still a downside to living in sunny areas: it’s exhausting. After a long day down at the beach or park, it’s important to be able to return to a lovely, cool home where you can hide away from those sun rays. This is when we begin to worship air-cooling systems and wonder how we ever coped without them.

We have the so-called evaporative coolers which pump and circulate water from the units’ water tank in order to adequately saturate a cooling pad. Air is then drawn from outside of the unit via the fan and through the cooling pad. There are also the popular air conditioners which use a chemical (refrigerant) to absorb the heat, transfer the energy, and cool the air.

The question now is which one should you own or install in your home? The evaporative cooler vs air conditioner analysis provided below will help you determine which one is best.

In order to provide a thorough comparison and discover which home cooling system is best for you, we’ll be comparing them across the three categories, namely environmental impact, air circulation, and running costs.

Firstly, let’s compare the environmental impact caused by running each system. For argument’s sake, we’ll be considering the product lines as a whole rather than specific units available.

Evaporative coolers as a whole emit far less CO2 than most conventional air conditioners. That is because they utilize the evaporation technique rather than chemical transmission, which requires more energy to operate efficiently.

While some traditional air conditioners can emit relatively low levels of CO2, they simply can’t compare to evaporative coolers without considerably compromising on their size and effectiveness.

Not only do these coolers emit a lower level of CO2 emissions but they also run quieter than most air conditioner units resulting in less noise pollution too.

Next on our list is air circulation. Not only is it important for your cooling system to produce a higher quality of air but to also circulate the air at an effective rate.

With regards to air quality alone, evaporative coolers are significantly superior to air conditioners. They work in open spaces, allowing fresh air to be passed through the system as opposed to air conditioners that recirculate the same air. They also add moisture to the air, so they won’t dry out your skin, eyes or throat.

Typically larger units operating at a higher wattage, air conditioners have an advantage over evaporative coolers when it comes to cooling a space quickly. However, as they are moisture-removing devices, air quality does suffer in the process.

When considering air circulation, it’s important to think about the requirements of the unit as well as your personal preferences. While an evaporative cooler may produce better air quality, they don’t typically perform as well when cooling large open spaces.

Our final comparison is between the everyday running costs associated with using each air-cooling system.

Evaporative cooler systems are simpler in construction as they only need enough energy to run the pump and fan. The simplicity of this unit means there is less to go wrong; therefore, lower service costs.

With a fairly high installation price to start, air conditioners will also set you back more in the long run. Apart from the pump and fan seen in the evaporative systems, air conditioners also need condensers, compressors, and expansion valves to operate. This requires more power and will subsequently raise your maintenance bill.

With installation fees of evaporators costing up to six times less than air conditioners, as well as approximately 50% less in operational costs each month, it’s an easy choice between the two.

Let’s just have a quick recap of the final tally:

With a tie for best air circulation, depending upon the intended use of your cooling system, we see a score of 2-0 in favor of the evaporative coolers. Before making our final verdict, we have produced a list of the clear pros and cons of each system.

When it comes to choosing between evaporative cooler vs air conditioner, the biggest defining factor in your purchase will depend on your environment. If you live in a hot and dry climate, an evaporative cooler will add moisture back into the air and make the environment more hospitable. In more humid settings, an air conditioner will remove moisture from the air to prevent you from feeling irritable.

Excluding the climate, evaporative coolers would be the clear winner for their money-saving efficiency and quiet operation. However, as climate is the main reason you buy a cooling system in the first place, our final verdict is a tie. Hence, buy a cooling system that is appropriate for the environment that you live in.