You can’t drag your household fan down the stairs, across the carpark, and all the way home. If you’re looking for more versatility, this article features the best personal fans available today, and explains how a personal fan is a better investment than a larger household fan.

Why Choose a Personal Fan?

Isn’t a personal fan just a waste of money? After all, once you stop using it, you’re just as hot as you were before? Wouldn’t a larger household fan work better? On the contrary. You can’t take your household fan with you. Plus, fans are only useful if they’re blowing on people; they’re not the same as an air conditioning system.

In reality, fans don’t cool a room. Whether you have a large electric fan, or a small personal fan, neither will cool the room. A fan makes you feel cooler by blowing the sweat from your pores, which causes you to lose heat as the moisture evaporates. This means that you can spend money and electricity on a large fan, or less money and less power on a small personal fan, and the end result is the same.

Which Are the Best Personal Fans?

Below is a short list of some of the best personal fans available, with accompanying pros and cons. Luckily, personal fans are very reasonably priced these days, so your budget shouldn’t be an issue. Plus, advances in tooling and machining have made even the cheapest fans more long-lasting and efficient.

How did a company that makes and sells ancillary PC items end up selling a range of personal fans? It’s almost as if one of the team felt the air that a laptop fan kicked out and said, “Maybe we can just sell the fan?” VersionTECH is a company with many different contacts and associations with smaller manufacturers, which means VersionTECH can often offer lower prices, and unique designs that bigger retailers are afraid to stock because of their slightly limited appeal. These designs range from cute personal fans to light-up gaming headsets.

It’s a very quiet device. In fact, if it gets bumped around in your bag and is accidentally switched on, you won’t hear it.

This is a very portable fan. It doesn’t have extraneous elements that may get crushed or bent, which means it fits perfectly in backpacks, bags and glove compartments.

It’s hard to argue with the price, especially for a rechargeable fan. This fan isn’t built to help you navigate a desert, but its output is okay and the price is just about right for the build/manufacture quality.

The manufacture quality seems to vary from one batch to another. It isn’t clear why, but some units are built to last while others are not.

The battery life is a little too short for some people. Plus, over time, the battery life becomes steadily worse, which means this fan has no resale value.

It’s easily broken, which is a downside, but may be expected for such a low-price item. There’s only so much you can expect for the few dollars you’re paying. Take care and treat this device gently. 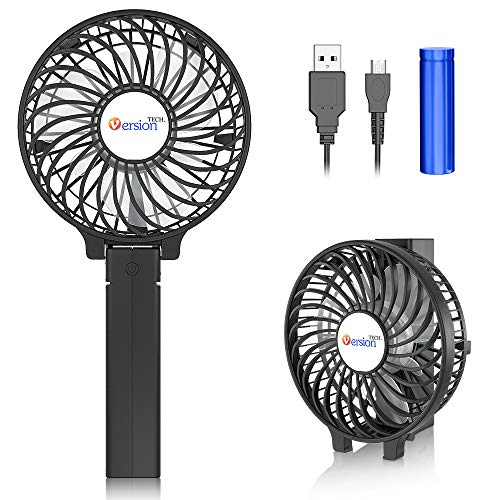 Here’s a Fortune 500 company that doesn’t mind occupying the middle ground. They create and stock items that are often mid-level priced, and that straddle the line between cheap tat and high-end. Honeywell isn’t afraid to crank out an economic product every now and again – and that’s what this personal fan is. The build quality isn’t awful, but it won’t take much punishment if the fan is mistreated.

The airflow is pretty good. You can feel it from three feet away. Even though it isn’t powerful enough to disperse nasty smells, it still kicks out more air than most of its similarly-priced competitors.

It’s very portable because you can fold it up and store it, and there are no unnecessary designs elements to get crushed or snapped off. You can fold and carry it, you can hang it, or you can stand it up.

This fan runs for around three hours after being charged, which some people think is a downside, but isn’t bad considering the amount of air this fan blows. Three hours of battery life is more than some gaming laptops.

The build quality isn’t great, but that’s what you get for the price you pay. You have to be gentle with this fan because it’s easily broken. Nevertheless, it isn’t a flimsy or overly weak device.

This fan comes with its own unique cable. You can’t buy a replacement, nor will other types of cable fit this fan. If you lose the cable, you’ll have to buy another fan.

The fan is more effective when plugged in with the USB. It’s less effective if you use batteries. Plus, the cable would be more useful if it were a little longer. It’s short enough for use on a desk, but has limited use in a place like a living room or dining room unless you put in on battery power. 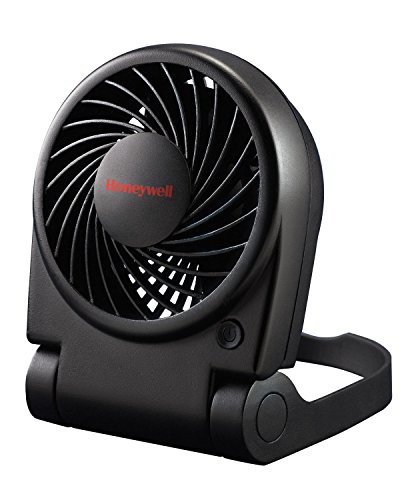 If China is churning out a new fan, air purifier or humidifier, then you can be sure to find it on the Holmes website. That’s not to say that Holmes only sells inferior products, but they don’t mind padding out their inventory with the cheap stuff. This mini-fan is very cheaply made, and won’t last very long, but it’s hard to argue with the price. If you’re looking for a cheaper solution to your air circulation problem, then Holmes is the way to go.

The fan has a cage and metal legs, which makes it ideal for storing in bags and luggage. It’s very unlikely to break, even if it’s being crushed by the rest of the items in your suitcase.

It’s compact and available at a fairly low price. You’ll need to use rechargeable batteries to power this fan, however, as it doesn’t have a USB cable. Yet it still pumps out a fair amount of air for a small battery-powered fan.

The fan is pretty quiet. It doesn’t vibrate very much either, unless you’re unlucky and receive a slightly imperfect unit.

It’s cheaply made and doesn’t last very long. Most fans in this price range require an extra amount of care and attention if they’re to last a long time. Mistreat this fan, and it will only last around three months.

The fan’s moving parts may wear out quickly. Just a small misalignment during manufacture, and the fan will slowly become less efficient until it breaks. If you’re unlucky, you may finish up with a fan that won’t work when you try and use it again next summer.

The airflow output is about average for the price of this fan. Most of the manufacturing costs were clearly spent on the metal case and legs. This fan is best used on desks, in close proximity to the individual user. 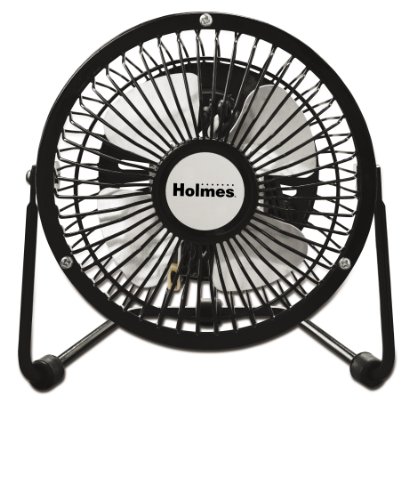 Those who know SkyGenius will appreciate that they’re the sort of company that always has a sale running. They’re in a perpetual state of product discounts. In reality, they’re selling low-cost solutions while making it look like they’re offering big discounts. Their fan is very low cost and works well, but it’s like the wings of a moth; mistreat them even slightly, and they’ll never work again.

It’s a rechargeable fan. This means you can charge it up, use it for around five hours, and then plug it in and charge it up again. Alternatively, you can plug it in via the USB cable and use it on your desk.

Calling it durable is incorrect, but it will take more damage than the average personal fan in its price range. It has a fairly thick outer shell, and the bars on the fan’s grill aren’t too flimsy either.

You may clip this fan onto various surfaces so that you may use the fan in many different places. You can also rotate the head, which means you can position this personal fan in many places for your own convenience.

Mistreat this fan even slightly, and it will stop working. Put simply, it’s easily breakable. This means that if you hit it with something hard, or drop it on your desk, then the resultant damage may cause the fan to become faulty.

The battery becomes less effective over time, which lowers the running time from six hours to about two hours between charges. You cannot replace the battery with regular batteries, but you can buy the special fan batteries online if needed.

You have to be very careful when you connect the charger to the port because it is made from weak plastic material. If you chip away at the plastic, or warp it, then the power cord will start to jiggle when you try to recharge the fan in the future. 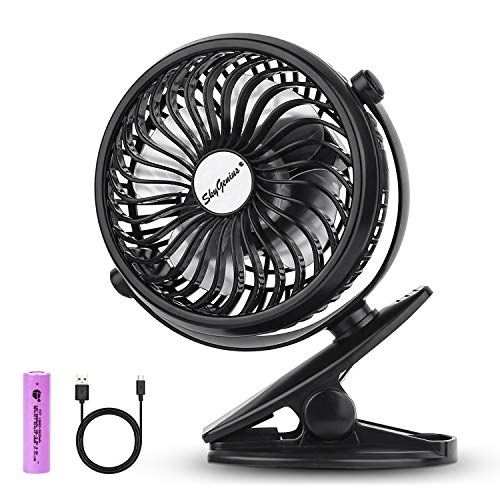 Most of the personal fans on the market are reasonably priced. This leads to manufacturers concentrating on one specific element. For some it’s durability, or the ability to be compressed while in luggage. For others, it’s the fan’s power, or how compact the fan is, or its power source.

The first thing you need to understand is that if you buy an inexpensive personal fan, it won’t last many years. Plus, you’ll have to be careful and gentle with it because it will be break easily. With that in mind, you need to ask yourself which manufacturing/build element you require. Do you want a portable fan? A rechargeable fan?

Do you want a fan that you need to plug in, or a fan that can easily be transported abroad? There’s also the airflow output, and the noise the fan makes. Some fans are very quiet, while others make their own variety of humming noise. Noisy fans aren’t always a bad thing because some people like to use them as white noise machines at bedtime.

Just remember that even the best personal fans have a limited lifespan. If you’re looking for something that will last years and years, then you need to spend more money and buy a high-quality fan. Otherwise, buy a cheaper one. There’s nothing wrong with that, since you’re only going to use it during the summer months and it will be locked in a cupboard for the rest of the year.